Ferric Phosphate Slug Pellets
There are many options for slug control such as beer traps, barrier strips and manual removal. The chemical options include metaldehyde, methiocarb and ferric phosphate. The use of methiocarb became illegal in 2015 and the Government has announced that it has reversed its decision to ban the use of Metaldehyde in June 2020. As an organisiation we have taken the decision to ONLY Stock and Promote ferric phosphate as the main option.

Are ferric phosphate slug pellets safe to use?
Ferric phosphate slug pellets are a cereal bait, they are designed to be attractive to slugs and thus may attract other animals. The manufacturers of commercial ferric phosphate molluscicides claim that their effectiveness is due only to ferric phosphate, which is considered very low in toxicity when eaten. However, research indicates that ferric phosphate, when marketed as a molluscicide is chelated (dissolves in water), and in this form could be toxic to earthworms, domestic animals and humans (if consumed in sufficient quantity). In a Which magazine article (2012), Dr. Kathy Lewis, head of the Agriculture & Environment Research Unit at the University of Hertfordshire, states, 'Without chelating agents, the slug pellets would not kill slugs at all. The chelating agent releases the iron molecules and the slug then essentially dies of iron poisoning”.
The manufacturers' instructions state that the pellets are safe to use if their instructions are followed which by implication means that if their instructions are not followed they may not be completely safe.
One concern is that many Metaldehyde slug pellets contain a bittering agent called Bitrex which makes them unpalatable to most animals. Currently, no ferric phosphate slug pellets contain this agent so there is nothing to inhibit a dog, hedgehog, rat or small child from eating a large quantity of them. The missing piece of information is how much would need to be eaten for them to be toxic.

Are ferric phosphate slug pellets organic?
Without knowing precisely what the chemistry of a particular type of ferric phosphate pellet is it is hard to answer this question but Organic phosphates (also known as organophosphates), are widely used in pesticides. The term “organic” in farming is used as a marketing term to indicate the minimum use of pesticides. It is therefore for the user to decide if ferric phosphate is a significant pesticide and whether it is organic or not.

Slug Pellets best practice
The advice for ferric phosphate pellets is the same as for all potentially harmful chemicals:


The information above was collated by Dab Alden from the following sources: 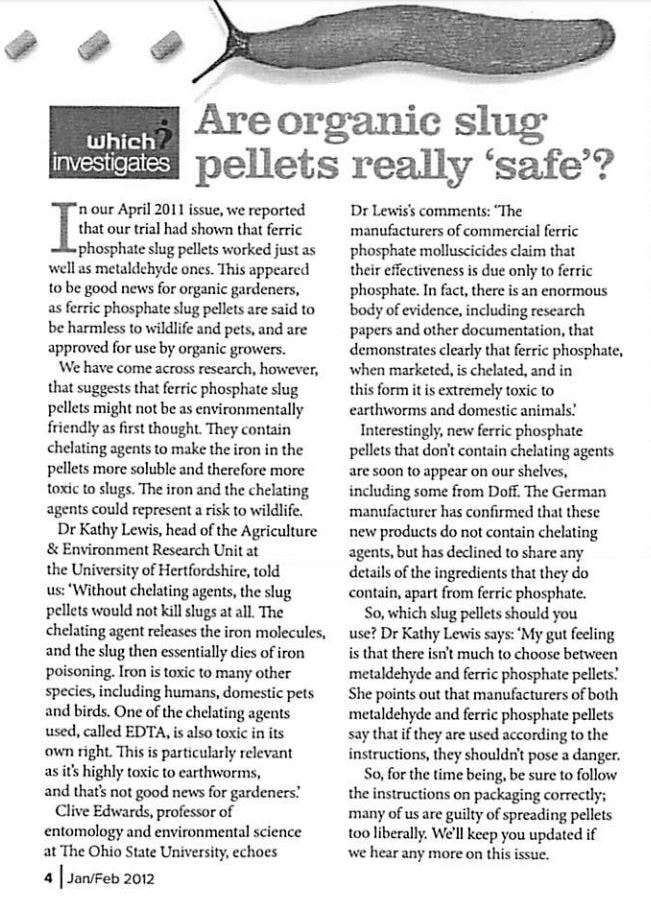